This year Blaxcell Street Public School is once again involved with Our Spectacular at the Sydney Opera House. We have students throughout years 2-6 in our choir group. They meet every Wednesday at lunch and practise contemporary and traditional songs. In addition to Our Spectacular, the choir also performs at whole school event such as Harmony Day, Multicultural Day and Presentation Day.

The Blaxcell Street Dance Group is made up of 32 students from Years 3- 6. All students were selected through an audition process to be a member of the dance group. This year we are aiming to once again perform at the Sydney Opera House in the Our Spectacular concert.

Our Spectacular started 13 years ago to showcase the talent of primary and high school students. It has a mass choir of 560 students and 22 individual items, which are subject to audition. If we are successful in the audition process students will perform at the Sydney Opera House on Monday 5 September 2016.  All rehearsals will be supervised by the Blaxcell Street Public School teachers involved. 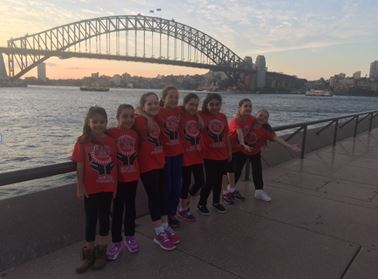 Interschool chess competitions are held during Term 2 each year. Our school enters teams depending on the numbers of interested students and the availability of parents to transport students, after school on a Friday. We are in the Cumberland Zone and the schools we play include Kings, Homebush and Berala. We usually have an away game followed by an at home game. Students can learn chess through school and anyone interested in playing can join the lunch time games in the old hall.

This year the Year 5/6 debating team participated in the Premier's Debating Challenge. The team performed excellently in all rounds, receiving insightful feedback from the adjudicator after each round. The team competed against North Strathfield, South Strathfield, Newington Public and Concord West during the competition.The team continued to grow and develop throughout the competition, producing one of the closest winning debates in the final round. Blaxcell Street won all rounds, only narrowly loosing in the second round to Newington Public.

Earlier in the year the team attended the Premier's Debating Workshop, crafting and refining their skills for debating. Here, they were joined by many other schools in Sydney to learn some very valuable tips and strategies for presenting strong arguments in a debate. At the end of the day, they had to enter a mini-debate and, applying all of the skills they had learned, they spoke extremely well.

The debating team were runners up in the zone, just missing out on the regionals. Well done to the team: Anna Lin, Sharlyn Tan, Aarya Phansalkar (Year 6), Layelle Etri, Georgina Than, Neelam Saha, Gunarb Das Gupta and Abhina Shanmugapriyan (Year 5).

In 2016, Blaxcell Street Public School was once again involved in the NSW Multicultural Public Speaking Perspectives Competition. In term 1, students across Years 3-6 prepared speeches on a range of topics with multicultural perspectives. The students selected to represent our school in the local area final in term 2 were:

Layelle Etri was successful in winning the local area competition whilst Georgina Than was one of the runner ups in the same competition. The competition involved students delivering both a prepared and impromptu (on the spot) speech. Well done on your achievements girls!

In the Regional Final held at Darcy Road PS on the 24th of August, Layelle Etri placed an amazing 4th just missing out on one of the top three prizes. Keep up the great effort, Layelle and best of luck again next year!

Overall, we were very impressed with the standard of the speakers involved. We encourage many students to try out (or try out again), so we can continue the tradition of success in this competition for 2017 and beyond….

Return to top of page

We would like to pay our respects and acknowledge the traditional custodians of the land and also pay respect to Elders both past and present.

Copyright for this website is owned by the State of New South Wales through the Department of Education. For more information go to https://www.dec.nsw.gov.au/footer/copyright.